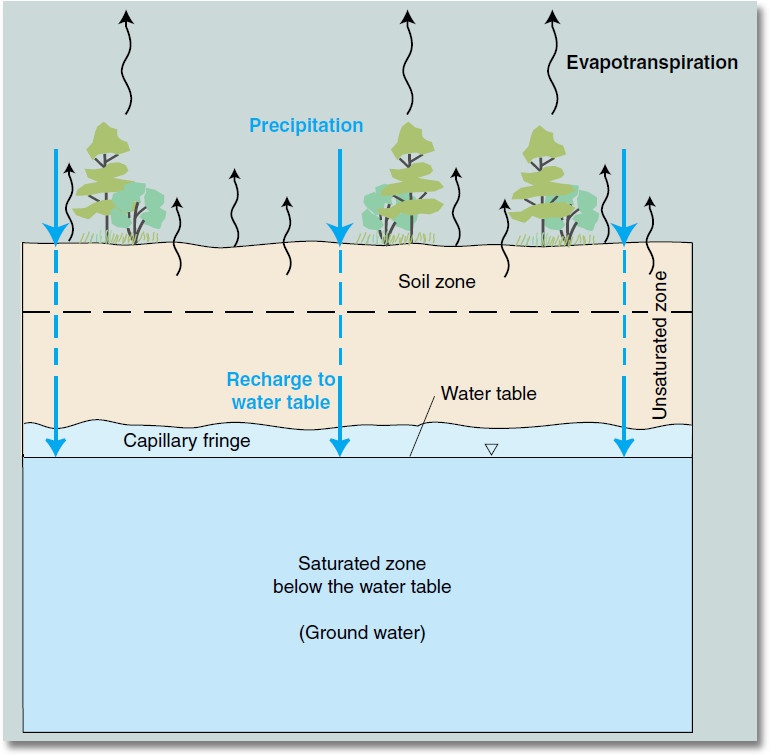 A concept not too many people understand is that of the capillary fringe within soils, and the importance of evapotranspiration. The capillary fringe is a sort of boundary line within the soil column above which water and moisture will actually move upwards rather than downwards. The reason for this is so is twofold: the upward pressure caused by evaporation at the surface (which sucks up moisture from deeper in the soils) and water uptake by vegetation roots, some of which can be quite deep. These two mechanisms are combined with the term “evapotranspiration.” So for rainfall to actually recharge the underlying water table it either has to be so intense and long lasting as to temporarily saturate the soils above the capillary fringe, or follow a storm that previously wetted the soils. It does not take too long for the soils above the capillary fringe to dry out, which is why this zone is called the unsaturated zone.

When hydrogeologists model groundwater recharge, they take this into account, if they are worth their salt. There are many other factors that influence how much of rainfall actually translates to recharge of the groundwater aquifer, such as how much of the rain becomes channelized and contributes to creeks and lakes versus the aquifer, etc.